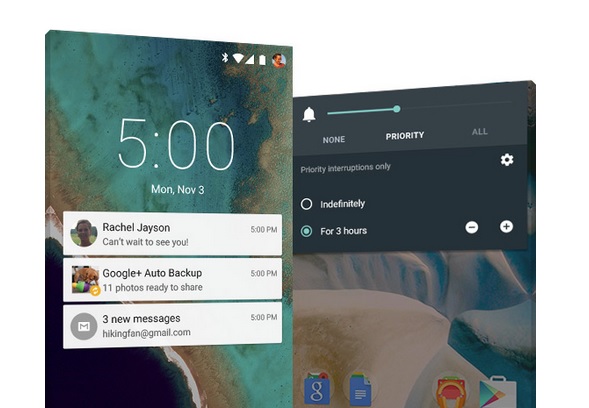 New phones and tablets with Lollipop come with encryption automatically turned on to help protect data on lost or stolen devices or from anyone who lacks password access.   Android devices running Jelly Bean and Kit Kat operating systems have had the capability of encrypting data, but this feature had to be expressly activated by users.  Now, all users will automatically benefit from the added protection.

Lollipop allows others to use your device in a restricted guest mode where they don’t have access to your personal data. In the guest user mode, first time guest users will see a newly-installed system with only the stock apps. Guest users can then sync their contacts, email, and photos from their Google account or install apps from the Play Store.

Have you ever shown someone a photo, and then watched in a panic as they kept swiping to see other photos on your phone? Screen pinning comes in handy when you have a friend or family member who you want to show something on your phone without letting them see other sensitive information. Screen pinning locks the screen to the content you wish to display – a photo or a video or a specific text screen – until you put in your password.

If you’re tired of entering your pin or swipe pattern every time you want to use your phone, Smart Lock may be a feature you want to use. You can program any Bluetooth device to be a trusted device. When your phone is within range of a trusted device, the phone will allow unlock and allow you to simply swipe to use. If the phone moves farther away from the trusted device, the phone will go back to being locked and you will need to enter their pin or swipe pattern. The cool thing about this is that trusted devices do not need to be stationary; users can pair their phones with a wearable or even a car.  For example, users can have their phone stay unlocked when near their Fitbit or laptop and can be sure that if they walk away from it, the phone will automatically lock.

Bluetooth MAC addresses broadcast by mobile devices are one of the identifiers often tracked by retailers or other venues in order to create location analytics reports.  See FPF’s Smart-Places privacy code for how this works and for opt-out options.  In Lollipop, Bluetooth MAC addresses will  now rotate when the device is scanning (central mode) and advertising (peripheral mode), making it harder for your phone to be tracked via its Bluetooth MAC address.

Many phones broadcast the recent SSIDs of routers to which they have connected, in order to make reconnecting easier.  If the last router your phone connected with was your home router, perhaps named “Smith Family home”, this information can be detected by the next WifI network you join. The new WiFi SSID suppression in Lollipop eliminates the broadcasting of recently connected routers (except for hidden SSIDs, which need to be broadcast for automatic connection).

Encryption by Default is a Very Big Deal

Turning on encryption by default is a major step forward for users and will do a great deal to ensure that the sensitive information on users phones can’t be accessed without their permission.  Many of these other features also add user friendly options that should make day to day use of Android devices more convenient, more private and more secure.