The entire FPF team is thrilled to congratulate Chris Wolf, FPF founder and Co-chair and cherished mentor, on winning the IAPP Vanguard Award.  The following remarks were delivered today at IAPP by Brenda Leong, FPF Senior Counsel and Director of Operations. 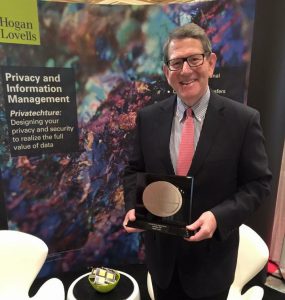 Welcome everyone and thank you for joining us this morning. I am honored to present the IAPP Privacy Vanguard Award. This annual award recognizes outstanding leadership, knowledge, and creativity in the field of privacy and data protection.

The recipient of the IAPP Privacy Vanguard Award is someone who has positively impacted the privacy industry through personal and communal achievements throughout their career.

This year’s award winner is known as the “Dean of the Industry” or, as The Washingtonian Magazine deemed him, the “Tech Titan”. He is not only a well-respected lawyer in privacy and data protection, and an accomplished and long-time respected leader in the field, but also a treasured friend, colleague, mentor or role model for those who have had the privilege to know and work with him.

He helped break the path for privacy law in the early days of its modern application when the Internet and related technologies made clear that existing laws were no longer sufficient. He has had a hand in advising and shaping thinking on many leading-edge issues including Internet free speech, Internet hate speech and the parameters of government access to stored information. In doing so, he led the development of a top-ranked privacy law practice, Hogan Lovells US, where he now helps lead a team of 27 full time privacy lawyers.

His influence on the global privacy agenda led to co-founding of the Future of Privacy Forum, DC-based a think tank dedicated to advancing responsible data use in commercial and consumer privacy. Working with great vision as part of the FPF team, he helped build it into a thriving community of business, academic and advocacy thought leaders, that has been influential in shaping public policy on many privacy issues.

As a “pioneer in privacy law”, he originated and edited the first privacy law treatise published by the prestigious Practising Law Institute and has written and lectured widely on the subject of privacy law. He is the co-editor of the PLI book, “A Practical Guide to the Red Flag Rules”, those identity-theft-prevention regulations issued by the FTC and financial regulators. He has testified in Congress and before the Privacy and Civil Liberties Board, participated in the 2014 White House Big Data Workshops, and served as a panelist at numerous FTC privacy-related workshops.

While playing this industry-leading role in the development of privacy and tech policy, he also managed to dedicate a major portion of his time and focus to such worthy charitable and philanthropic causes as the Anti-Defamation League – where he serves as the National Civil Rights Chair – and Food and Friends, a Washington-based nonprofit that provides home-delivered meals and nutrition counseling for people with life-challenging illnesses, and several other such organizations.

Finally, he has played all these roles while prioritizing time for family and friends – he manages to be there as a friend and colleague for an incredible swath of people – with grace and warmth – with diplomacy when required – and always with great class.

Jules Polonetsky – his cofounder at FPF – was very disappointed he couldn’t be here today, but he told me that there was a classic Jewish word that sums up today’s winner – he is a “mensch”…and for those like me whose yiddish might be a bit rusty – this simply means: a “fine human being”.

It gives me great pleasure to announce, and welcome to the stage, the winner of this year’s Privacy Vanguard Award, Christopher Wolf.

Few topics in education have generated as much discussion as the potential for data and technology to transform teaching and learning. While the public discourse has been dominated by advocates and critics alike, we’ve learned little about how most parents of school-aged children view the risks and opportunities of using data and technology in the classroom. In FPF’s report “Beyond the Fear Factor: Parental Support for Technology and Data Use in Schools,” we investigate prevailing attitudes towards the emerging use of technology and data in education and children’s deepening online presence.  Analysis of these data allowed FPF to create a series of recommendations to both ed tech developers and schools.

You can read the full report HERE.

StateScoop, a website covering the use of technology and data at the local, state, and federal levels, wrote of FPF’s survey on parents’ attitudes towards student data this past Monday.

Read the full article at: http://statescoop.com/parents-data-security-concerns-challenge-school-systems/#sthash.ZrHXmXuf.dpuf

On September 17, Passcode published “The Case for Safeguarding Students’ Digital Privacy”, an opinion piece discussing the results of a recent FPF-sponsored survey on parents’ attitudes towards the collection and use of student data.  Coauthored by FPF’s own Evan Selinger and Brenda Leong, the piece identifies the risks to students who maintain an active online presence without a working knowledge of sensitive data and digital privacy, and what schools ought to do to address this emerging problem.

We personally believe elementary schools that integrate tablets, laptops, and desktops into their curricula should be assuming more responsibility for confronting the long-term implications of online identities created by students.

When students are led through the process of creating accounts and setting up passwords, schools become responsible for providing a broader explanation for why passwords matter and what happens once information is stored in databases and others can analyze it. Even if the ideals reflected in the survey became safeguarded by perfect procedures…students still would remain vulnerable to all kinds of extra-curricular data collection and scrutiny.

You can read the full article by clicking here.