The Future of Privacy Forum tracks student privacy news very closely, and shares relevant news stories with our newsletter subscribers.* Approximately every month, we post “The Top 10,” a blog with our top student privacy stories. This blog is cross-posted at www.ferpasherpa.org.

We had so many major student privacy news stories over the past two months that we decided to split our usual Top 10 into a federal vs other news edition. Scroll down to see the non-federal Top 10 stories. 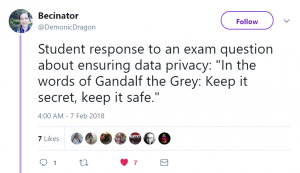