Beginning Wednesday, the networking Web site is taking the rare step of requiring its more than 350 million users to review and update their privacy settings.

The new controls are designed to simplify the cumbersome privacy controls that have confounded many users. Facebook said the changes are based on user feedback — though it remains to be seen whether the shift will mean fewer surprises for people who have unintentionally shared party photos with their bosses.

As part of the changes, Facebook users will be able to select a privacy setting for each piece of content, such as photos or updates, that they share on the site — as they share it. The choices are “friends” only, “friends of friends” or “everyone.” There is also an option to customize groups of friends for certain kinds of updates — such as “college buddies.”

“Jules Polonetsky, co-chairman and director at the Future of Privacy Forum think tank in Washington, praised how the process resembles the way people decide what to share in their day-to-day lives. He said putting the controls “when you need it, right there, is far better than putting it in a `privacy’ or `help’ location” somewhere on the site.”

Polonetsky: Are the Online Programs Your Child’s School Uses Protecting Student Privacy? Some Things to Look For

Amelia Vance's Letter to the Editor in the New York Times 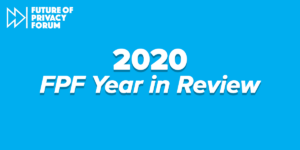 FPF in 2020: Adjusting to the Unexpected
Read More