FPF is proud to welcome its newest Senior Fellow, Ira Rubinstein. Ira will be working with FPF staff, fellows and members on a number of cross-Atlantic privacy issues and will be collaborating with EU academics and institutions on projects focused on de-identification, ethics, big data, and other issues.

Ira Rubinstein is a Senior Fellow at the Information Law Institute (ILI) of the New York University School of Law. His research interests include Internet privacy, electronic surveillance law, big data, and voters’ privacy. Rubinstein lectures and publishes widely on issues of privacy and security and has testified before Congress on these topics on several occasions. Recent papers include a study of Voter Privacy in the Age of Big Data; a research report on Systematic Government Access to Personal Data: A Comparative Analysis, prepared for the Center for Democracy and Technology and co-authored with Ron Lee and Greg Nojeim; Big Data: The End of Privacy or a New Beginning; published in International Data Privacy Law in 2013 and presented at the 2013 Computer Privacy and Data Protection conference in Brussels; and Privacy by Design: A Counterfactual Analysis of Google and Facebook Privacy Incidents, co-authored with Nathan Good, which won the IAPP Privacy Law Scholars Award at the 5th Annual Privacy Law Scholars Conference in 2012.

Prior to joining the ILI, Rubinstein spent 17 years in Microsoft’s Legal and Corporate Affairs department, most recently as Associate General Counsel in charge of the Regulatory Affairs and Public Policy group. Before coming to Microsoft, he was in private practice in Seattle, specializing in immigration law. From 2010-2016, he joined the Board of Directors of the Center for Democracy and Technology. He also serves on the Board of Advisers of the American Law Institute for the Restatement Third, Information Privacy Principles; the Organizing Committee of the Privacy by Design Workshops sponsored by the Computing Research Association; and he served as Rapporteur for the EU-US Privacy Bridges Project, which was presented at the 2015 International Conference of Privacy and Data Protection Commissioners in Amsterdam. Rubinstein graduated from Yale Law School in 1985.

We are excited and proud to have Ira on the FPF team! 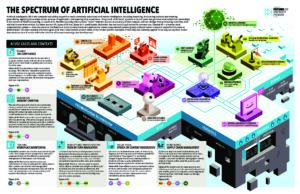 The Spectrum of Artificial Intelligence – An Infographic Tool
Read More