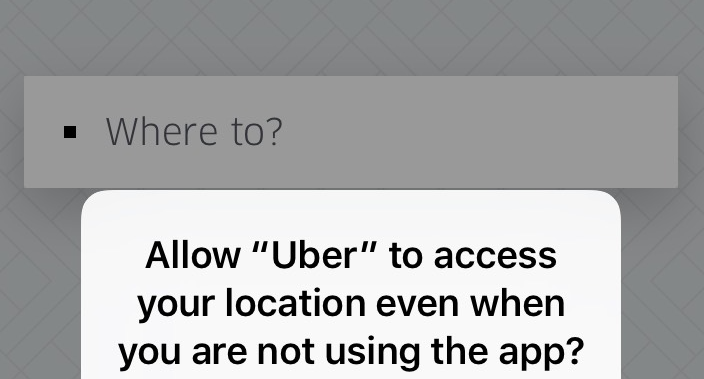 Uber recently announced that its iOS app will require access to location data either “Always” or “Never.” Given some of the confusion about the change, we are writing to help consumers better understand what Uber modified and why.

In 2014, with the rollout of iOS 8, Apple created new location permission options, which allowed iOS app developers to offer users the option to permit location access “While Using the App” in addition to the preexisting options of “Never” or “Always.”

Under iOS 8 and until recently, Uber provided users with all three options. When users selected the “While Using the App” option, Uber only received location data when the app was actually open and in the foreground of a user’s phone – i.e. when a user was actively calling an Uber or checking the location of the vehicle on the map.

As a result, key information about how far riders were from the vehicle they were seeking to meet was not available to the company. The only location information available was the pin denoting the location the rider chose originally when hailing the Uber. If the rider minimized the app or switched to a different app and then exited their building around the corner from the main door, or if they were down the block or across the street from the pin’s location, accurate location information was not available to help the Uber driver find them.

Similarly, at drop-off, for riders using the “While Using the App” option, Uber did not receive information about whether the user was dropped off at the intended location-any route information was garnered solely from the driver’s phone. For example, if the map led the driver to a location where users had to cross a dangerous street and walk around the building to actually get to the entrance, or need to wave down the driver to get picked up again because they were not taken to the intended location, that information is today usually not available to Uber; this lack of data limits Uber’s ability to correct the error for future passengers.

Because of these shortcomings, Uber is now asking users to allow the company to access location information when riders may not have the app in the foregrounds of their phone – specifically from the time of hailing the Uber to 5 minutes after drop off. Although doing so technically grants Uber access to location “Always”, the company has committed to access location only for specified purposes: to improve pickups, drop offs, customer service and to enhance safety.

Some critics have objected to Uber’s change, focusing on the fact that the company will be able to collect user location for 5 minutes after drop off. Some Uber users want to keep where they are heading after drop off confidential or don’t want that information stored in a database.  Perhaps so, but those users would be far wiser to turn off location settings for their phone entirely, given the number of apps that could be collecting their location information. Riders can still do so when exiting the car, or they can choose to “Never” share their location with Uber and instead type in their location and destination.

Location information is often sensitive and users should think carefully before allowing apps to access location data. Many apps don’t need location data and request it simply to share it with advertising companies or other third parties. But here, the convenience and service improvements intended by this change promise real value for riders.

What apps are getting your location and are they collecting it “Always” or only “When Using the App”? On iOS, checking Settings/Privacy/Location Services to find this information and to revoke permission from any app that doesn’t have a good reason to be collecting your location.

FOR IMMEDIATE RELEASE: FPF and NADA Launch Guide to Consumer Privacy in the Connected Car