With much media attention focused on new Apple hardware, including new iPhones, Apple also released updated versions of its mobile and desktop operating systems for public download this week. The software upgrades (iOS 12 for iPhones, and macOS 10.14 Mojave for desktop Macs) bring many new features, such as Group FaceTime, options to customize notifications, and aesthetic changes such as an optional desktop “Dark Mode.”

Amidst these upgrades, what’s new for data privacy? Consumers are increasingly aware of privacy issues, and Apple has articulated the company’s commitment to privacy “as a human right.” Meanwhile, regulators are entering the consumer privacy debate, with this week’s Senate hearing bringing further attention to the data practices and policy positions of leading technology companies.

In their Fall updates, Apple improves several existing privacy controls for iPhone users, and MacOS 10.14 brings privacy-focused technical modifications. Several of these updates were first announced at Apple’s June 2018 Worldwide Developer Conference (WWDC), which we discussed (along with major updates to Google’s Android P) earlier this summer, and have now been released to the public.

Below, we provide round-ups of privacy updates in iOS 12, macOS 10.14 (Mojave), and the App Store Review Guidelines.

The following privacy updates are included in iOS 12, which can be downloaded on devices as old as the iPhone 5s and iPad Air.

In addition to technical updates to their operating systems, Apple has also made significant changes to its App Store Review Guidelines, the rules for how developers may collect and use personal information from users. These Guidelines, which apply to the third party developers who provide apps through the App Store, can be very influential when paired with robust oversight. In May, Apple began removing apps from the App Store for violations of policies against sharing location data with third-party advertisers without users’ consent. In August, Apple removed apps from the App Store that violated its policies against collecting data to build user profiles or contact databases.

Updates to the Guidelines include: 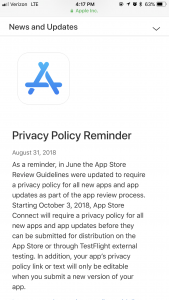 “Customer trust is the cornerstone of the App Store’s success. Apps should never prey on users or attempt to rip-off customers, trick them into making unwanted purchases, force them to share unnecessary data, raise prices in a tricky manner, charge for features or content that are not delivered, or engage in any other manipulative practices within or outside of the app.” (5.5)

Amidst new hardware and design features, Apple has introduced important technical updates to iOS 12 and MacOS that aim to empower users to better manage their information. Developers should also take note of significant changes to the App Store Review Guidelines, which help determine the ways in which apps and app partners can collect and handle user data. These changes help provide users with the ability to make more informed decisions that reflect their privacy preferences.