The Future of Privacy Forum tracks student privacy news very closely, and shares relevant news stories with our newsletter subscribers.  Approximately every month, we post “The Top 10,” a blog with our top student privacy stories. This blog is cross-posted at www.ferpasherpa.org.

The horrific shooting at Marjory Stoneman Douglas High School in February has brought up and highlighted numerous student privacy issues. As I discussed in FPF’s statement to the Federal Commission on School Safety, there are many legitimate reasons, including attempting to prevent acts of violence, that schools surveil students, but there are also significant privacy and equity concerns that must be considered. In the wake of the shooting:

2. School Safety and Student Privacy, Part 2: does the law need to change?

President Trump’s school security plan called for a review of FERPA. The Commission held a meeting on “Curating a Healthier & Safer Approach: Issues of Mental Health and Counseling for Our Young” on July 11th, and FPF’s Vice President of Policy, John Verdi, was invited to testify.

Privacy has been in the headlines non-stop with Facebook and Cambridge Analytica over the past couple months, and numerous news articles asked stakeholders what they thought all of this means for student privacy and schools, especially around Mark Zuckerberg’s testimony to Congress. In the wake of those hearings, schools across the country are assessing their own data policies. Facebook has announced it will not seek any additional parental consent from teenage users in the United States. Common Sense Media filed a request with the FTC to investigate how Facebook’s “data mishandling” in the wake of Cambridge Analytica has impacted teenagers, specifically.

In the meantime, the tech backlash has continued to impact ed tech: Wired reports that “It’s time for a serious talk about the science of tech addiction” and its impact on well-being and health; “Ninety-five percent of principals said students spend too much time on digital devices when they’re not in school” via EdWeek;  two higher ed professors write that “There Are No Guardrails on Our Privacy Dystopia” in Motherboard; and  “Screen time” also continues to be a big topic of debate on blogs and in the news that has implications for privacy.

Meanwhile, in May, the House Education and Workforce Committee held a their fourth hearing on student privacy in three years. FPF’s Amelia Vance was invited to testify. You can watch the hearing here, read the testimony of the speakers here, or read the write-up in EdScoop.

7. Can students or parents record what happens in school?

8. Fordham University’s Center on Law and Information Policy (CLIP) released the study, “Transparency and the Marketplace for Student Data,” which examines the practices of data brokers who buy and sell information about students.

In the study, the authors describe existing privacy laws, map the commercial marketplace, and describe the challenges of understanding how data about students is collected and used. FPF released a blog responding to the concerns raised in the study, and expanding on how various federal and state privacy laws – from FERPA to FCRA to PPRA – may or may not apply to the practices described.

9. NAICU has come out in favor of the “Right to Know Before You Go” Act,

However, they still remain opposed to the College Transparency Act, favored by most other public colleges, advocates, and policy makers.

10. Common Sense Media released a report on the “2018 State of EdTech Privacy.”

There is a fantastic new video from the Utah State Board of Education on the Other FERPA Exceptions (see their original break-out hit here!) 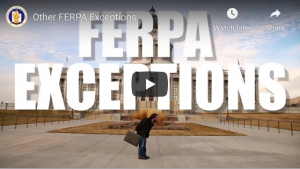