The Future of Ad Tech: A Discussion with FPF's Stacey Gray

Almost everyone has had a similar experience: visiting a website to shop for a product and then having an advertisement for that product “follow” them around the internet. Most free content today, from social media to news, is funded by ads. In order to deliver those ads and measure their effectiveness, companies today rely heavily on data-driven technology (“ad tech”).

Stacey Gray is FPF’s lead Policy Counsel on ad tech and location services. Prior to joining FPF as a Policy Fellow in 2015, Stacey was at the Georgetown University Law Center, primarily focused on civil rights litigation and technology. In this week’s 10th Anniversary post, she traces the evolution of ad tech from the simple cookies of the past to the personalized billboards we might see in the future. 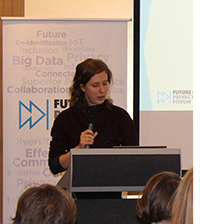 How has advertising technology changed over the past 10 years?

Probably the biggest change in the last decade has been the adoption of smartphones. It’s cliché, but it’s hard to overstate how everyone carrying a pocket supercomputer with 20+ sensors on it has changed the way advertisers think about ad campaigns. Conversations 10 years ago were limited to the online and desktop world—how websites placed “cookies” on browsers and whether ad networks should be able to track people across different websites. Now advertising technology is focused on reaching individuals in hyper-specific contexts (the right person at the right time and place) and measuring effectiveness by finding ways to link behavior across many devices and platforms.

Another way to describe it is that there’s been a blurring of online and offline worlds. This is enhanced by the rise of the so-called “Internet of Things,” meaning that we’re surrounded by connected devices—cars, appliances, toys, TVs, speakers—that collect and share information. Location-based marketing has also grown tremendously, with companies interested in geo-fencing content (targeting ads to a particular area) as well as using location data to measure things like whether people visit stores after seeing an advertisement. So there has been an explosion in the amount of data available about people and devices. In some ways though, the more things change, the more they stay the same. Advertisers still have the same basic goals—to serve ads to people and to measure whether the ads were effective in driving sales or visits. They are just doing it across far more channels and platforms than ever before.

How has FPF made sense of these changes, and what practices has it recommended?

We primarily convene privacy leaders who work on ad tech to level-set and figure out best practices. The FPF location & ad tech working group has 300+ participants, and a lot of good work happens behind the scenes. When we comment publicly, it’s usually to try to bridge the gaps in understanding between industry, advocates, and policymakers, or to identify privacy tensions in new technologies.

For example, we published a report in 2015 on cross-device tracking, explaining how and why companies are so interested in linking devices belonging to the same person. We’ve analyzed the state of privacy practices in smart TVs and published more narrow guidance on things like session replay scripts, Apple software updates, or understanding Bluetooth beacons. Advertising technology often raises issues that go beyond privacy, too. For example, advertisers have to ensure that they are not unfairly or harmfully discriminating against people on the basis of class, race, or gender. Advocates worry about “filter bubbles,” transparency in political advertising, and other potential harms related to algorithmic decision-making about online content.

What other developments in this space are currently being debated?

The biggest debate in ad tech right now is how it will be meaningfully regulated. For a long time, ad tech mostly self-regulated with codes of conduct through organizations like the Digital Advertising Alliance (DAA), Network Advertising Initiative (NAI), and others.

In contrast, in the last couple years, we’ve seen a massive proliferation in laws and regulations that specifically impact ad tech. Most importantly, European regulators are beginning to enforce the General Data Protection Regulation (GDPR) against ad tech companies and in some cases are being asked to evaluate the legality of the ecosystem as a whole. In the United States, the California Consumer Privacy Act (CCPA) that comes into effect next year will require companies to allow people to opt out of “sale” arrangements with their data, which will have a major impact on typical online and mobile advertising business models. Meanwhile, many other states are following California’s lead and introducing privacy legislation to be considered in 2019, not to mention the ongoing debate in Washington, DC, over a baseline, comprehensive national privacy law. There is a great deal ahead in 2019 and the opportunity (and challenge) for FPF is to combine industry knowledge with support for strong privacy safeguards to help shape effective regulation.

What changes in advertising technology do you expect to see in the next decade?

Advertising will continue to merge the online and offline worlds. I expect digital billboards using “intelligent video analytics” to be a major trend over the next 5 to 10 years. This is already beginning to happen. Last year in New York City, for example, there was a Fashion Week ad campaign using digital signs with video cameras that applied AI to analyze people’s outfits as they walked by and complement them for wearing particularly interesting ensembles. Walgreens has also started using facial characterization technology in their stores to offer ads based on whether the visitor is perceived to be male or female or a certain age. This kind of real-time video analytics may not always impact privacy, but may nonetheless change the way we think about public spaces.

I also think we will see a major shift in the way we understand revenue models for publishers. Ad-supported business models have generated a lot of free content, which can be good and often seen as “democratizing,” but in many ways it has come at the cost of data privacy. As the regulatory landscape shifts, I expect we will see new ideas and models for things like micro-payments or other new ways for people to support quality content. That said, we want to make sure that we don’t create an income divide in who has access to things like quality news and that we’re equally addressing issues of fairness and equal access to digital products and services.

Finally, it seems clear that we’re at the beginning of a major growth in academic and private support for public interest technology. I’m proud of my alma mater, Georgetown University Law Center, for recently joining with 20 other leading universities in forming a Public Interest Technology University Network to solve problems at the intersection of law and technology. The field of privacy-enhancing technologies (“PETs”) is also really promising. As we look ahead, I hope FPF’s unique knowledge and voice in the privacy space will continue to be helpful in supporting this kind of technical research and scholarship.