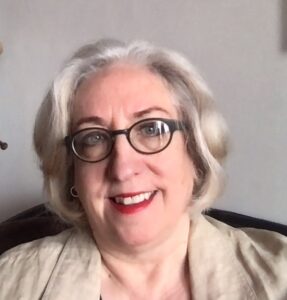 Elaine Laughlin is a philanthropy leader with three decades of service to the nonprofit community. She is currently Director of Institutional Partnerships at The Trustees of Reservations, one of the nation’s oldest and largest land conservation organizations. From 2013-2020, she was Vice President of Foundation & Government Development at WETA in Washington, DC, where she led a team raising more than $30 million a year for PBS NewsHour, Washington Week, the documentaries of Ken Burns and Henry Louis Gates, Jr., In Performance at the White House, Ready to Learn and numerous other projects and community programs. Prior to WETA, she was a Director in the Philanthropic Partnership Group at the Pew Charitable Trusts, developing strategic partnerships for civic, health, cultural and environmental initiatives. Laughlin spent nearly a decade as Senior Program Manager at WGBH in Boston, the leading producer of content for the PBS system, where she secured funding for NOVA, Frontline, American Experience, and numerous children’s programming and local initiatives, as well as radio and online projects. Laughlin has also managed programs and raised funds for the arts, humanities, and STEM education at TERC, Arlington Center for the Arts, Freedom Trail Foundation, Massachusetts Cultural Alliance and Arts/Boston. She holds a master’s degree in Communication from Cornell University and a bachelor’s degree in English from Wellesley College.