The U.S. Presidential election is almost upon us, and it could have a big impact on the future of the Federal Trade Commission (FTC), the de facto national privacy regulator and law enforcer. The FTC lineup has been steady since 2018 but that could soon change – no matter who wins the election. 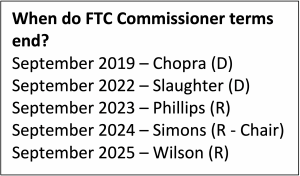 Commissioners can be re-appointed. Sometimes they leave before the end of their term.

Commission Chairs often leave when there is a change in Presidential Administration. If FTC Chairman Joe Simons chose to step down, his vacancy could be filled by a new Chair, or a non-Chair Commissioner could be appointed and a sitting Commissioner elevated to Chair.

Two of the five Commissioners must not be from the President’s political party. It’s typical for the Administration and Senate leaders to agree to “pair” appointees from each party when there is more than one vacancy in order to ease Senate confirmation. That would be unlikely in a new Democratic administration because there would not be a Republican vacancy unless more than one sitting Republican vacated their seats. But “pairing” can happen across agencies, with Senate leaders of each party agreeing to move the nominations they support as part of complicated bi-partisan agreements.

Although the current Commissioners reflect a range of ideological perspectives, the agency has generally been fortunate to be led by appointees recognized for their professionalism, integrity, policy smarts, and ability to collaborate across party lines – traits that will be valued in their eventual successors as well.

Change Could be Soon Coming to the FTC, the Lead U.S. Agency on Privacy
Read More